Dallas Athletes Racing began with a single kids and family triathlon in Coppell, Texas in May of 2001. It became the largest kids and family multisport event in Texas in its first year. The event was “put-on” by a husband and wife team, Tom and Vicki Ryan. Both of their daughter’s took part in the event. Grandma volunteered and ran the run portion of the event with her granddaughters.

With the success of this event, Dallas Athletes Racing began to grow.

As DA Racing continued to grow, Tom needed some more help. He moved one of his best friends since first grade (Dan Jones) with his wife and three children to Dallas from the frozen tundra of Nebraska. Dan operates all the logistics of DA Racing.

With Dan making sure all race logistics are top notch, Tom’s job remains energizing the events. In other words, Tom’s job is to get the folks to the party.

DA Racing celebrated their 10th anniversary in 2012. With over 30,000 athletes in their database, DA Racing has helped raise thousands of dollars for Team in Training and created the Wounded Warrior Half Marathon dedicated to raising money for injured military. DA Racing events are also a major donation source for two Dallas area school districts.

The consensus on a DA Racing event is summed up in one word, FUN! A few years ago, DA Racing received a letter with an excellent quote, “Dallas Athletes events are parties where you can get a workout.”

The company remains grass roots with Dan and Tom (now partners) active in every area. Tom’s wife Vicki has worked events since day one. You’ll see her at all packet pick-ups. The Ryan’s two daughter’s, who once competed in the events, now work the events too. Their oldest daughter (Chandler) works side-by-side with her mom at packet pick up. Their youngest daughter (Mary) volunteers on race day, working aids stations and helping with the tear down after each event.

Key volunteers are all long-time friends of Dan, Tom and Vicki. DA Racing is family and friend owned-and-operated small business that focuses on FUN events along with a healthy lifestyle! 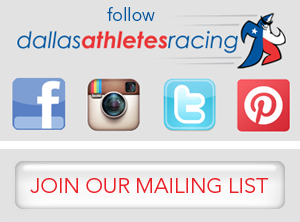